Back in the day, petrol was 36p a litre. Beer was 60p a pint (happy days). That most underrated of presidents, Ronald Reagan, was in the White House. The Falklands War had just started but a German entry called “A little Peace” sung by Nicole won the Eurovision song contest. Very appropriately as it happens, “Chariots of Fire” won the best film Oscar.

We’re talking the Spring of 1982. A year earlier the first London Marathon had inspired a few local ladies to start running. Four of them, with their husbands, entered the 1982 London Marathon. They were Angie and Bev Curtis, Val and David Fieth, Gill and John Scrivens, and Tricia and Tony Saberi. The group expanded and formed itself into a proper club which they called Garden City Joggers. The early club letterhead credited Angie Curtis and Val Fieth as co-founders. We take the founding date as being May 1982 when the first Committee meeting was held. The first Chairman was John Strafford, the first Secretary Mary Varley and the first Treasurer Stuart Brittain. 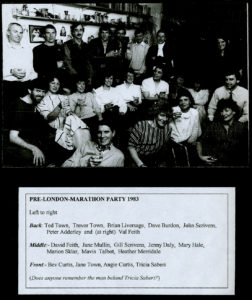 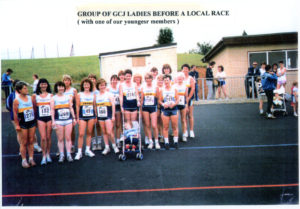 (This period was the height of the “road running boom”. The newly launched New York and London Marathons had demonstrated that road running was a sport for everyone and, as a result, hundreds of clubs like GCJ were formed throughout the UK. What had previously been a secondary activity for the established track and field Athletic Clubs had become a mass participation sport.)

The new club had no home base. Training sessions (Tues and Thurs evenings and Sunday mornings) started from the Campus steps in the town centre and regular routes were developed around the reasonably lit town streets for the darker evenings, and much farther afield for the light evenings and the longer Sunday runs. Incidentally the original club logo, drawn by one of the founding group, was supposed to represent the main roads of WGC.

In those pre mobile phone and internet days, communication among members was by land line, monthly newsletters delivered by snail mail and monthly meeting evenings at Welwyn Rugby Club which also hosted the occasional quiz nights, prizegivings etc. and the AGM.

The chosen running strip colours for GCJ were light blue, dark blue and gold but over time the gold morphed into yellow and a much more modern design was introduced in 2015. 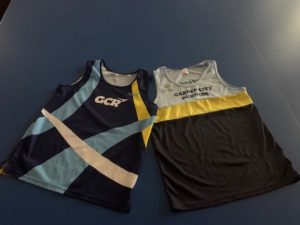 GCJ quickly gained a reputation as a friendly, welcoming, socially active, community club. It grew steadily in the early years. It founded a key event in the road race calendar – the Garden City Ten which was staged annually for nearly 30 years and raised tens of thousands of pounds for local charities.

In 2002 we got a significant boost when a large group of runners from the local track and field club joined us. They had the effrontery to be generally a lot faster than most of us and so we changed the name of the club to Garden City Runners to reflect the wider spread of ability.

In the early 2000s the strengthened club became competitively more successful, dominating the local road and cross country leagues for a few years but nevertheless cementing its reputation as the place where an absolute beginner could go for training and encouragement and be running a marathon within a year or two.

From its inception the club has sought to affiliate to the appropriate associations (National, Regional and local) which govern our sport. Notably, in 2007, the club supported the efforts of one of its officers who established the Association of Running Clubs (ARC), of which GCR was a founding member.

Certain events have featured heavily in the club’s history – the London Marathon, of course, where pre 2007 we usually had 30+ entrants each year and although now harder to get places we still today have many members who take part plus a group who volunteer at the finish line. However, probably the most popular race in our formative years was the Sunday Times Fun Run which took place annually on a Sunday in September in Hyde Park from 1978 until 1987.

That event was kind of a kind of Glastonbury for joggers, with clubs and running groups setting up their tents and flags and picnicking alongside the Serpentine while watching their friends in the day’s races, with tens of thousands of people of all standards taking part, in age group events staged over a rolling two-and-a-half-mile grassland course throughout the day. One or two of our older members still truthfully boast that they had beaten Olympic champions in their age group! Here is a photo of GCJ group at the event: 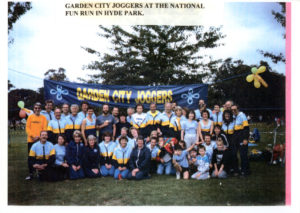 In more recent times the parkruns have effectively provided something similar on a weekly basis and GCR members have been proactive in helping organise the local ones. Another highlight event is the Round Norfolk Relay, an annual September event of 193 miles round the Norfolk County boundaries, involving 24 hour logistics support. The club continues to support local charities and the Welwyn 10k is a key part of the Welwyn Festival and has raised over £10,000 for good causes within our community.

Our membership at this time is around 370 but over 2000 people have been members of the club. They’ve included a world champion ultra runner, a national record holder, numerous national age group record holders, a multitude of average guys and girls who join to get fit and then discover a love of running with a group of like minded people.

Four decades is a long time and lot of trainers have been worn out along the way. Like all clubs GCR has had its ups and downs but we’ve probably enjoyed more than our share of competitive success. The important thing is that we have retained the friendly and encouraging ethos that has been the hallmark of the Garden City Runners throughout that time. 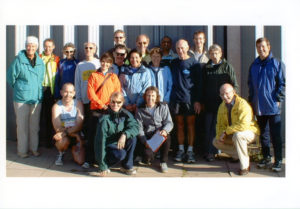 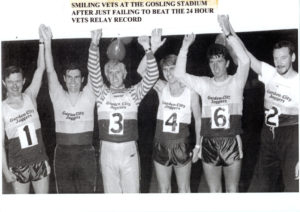